The following is an excerpt from The Springfield & Franconia Times, January 31, 1973, by Barbara Lovelace:

To some Franconia residents this brief history is a familiar part of their lives. Those who are new to the Springfield-Franconia area might like to go back to the year 1872. During the year of 1872, Franconia saw its first public school built. The school was the second house before the railroad bridge. The house still stands on the original spot and looks exactly as it did at the time with the exception of the picture window in the front. Originally the school was gray and is now painted green. Boys at that time used to play ball on the west side of the house in the potato patch...

You cannot mention the history of Franconia Elementary School without including the name of Higham. Mrs. Kathie Higham, who has lived in Franconia since 1916, owned the property on which the school stands. In 1916, Mr. and Mrs. Higham bought a farm with about 50 acres and moved into the white farmhouse. The Higham's called their farm "Twin Oaks" and their home was located four doors up from the school on Franconia Road. In 1931, while Mr. Woodson was superintendent of Fairfax County Public Schools, Mrs. Higham sold about two acres of her farm to Fairfax County and the school started as a four-room schoolhouse with an auditorium. Fairfax County later purchased two more acres for the playground. When school was dedicated on January 29, 1932, the students numbered 114. Building additions have been made to the school in 1938, 1948, 1953, and 1956. The end of 1972 saw the completion of a new wing housing office, library, and classrooms.

What's in a Name?

Should our name be spelled Franconia or Frankhonia? Learn about the origin of our school's name in this video.

Franconia Elementary School opened at its current location on February 1, 1932. Our school initially had four classrooms and an auditorium. The building, with the exception of the plumbing and heating plant, was constructed by the Industrial Engineering and Construction Company of Washington, D.C., for $14,382.

Our school opened in the midst of the Great Depression. On September 5, 1933, the Fairfax County School Board applied for financial aid from the Federal Emergency Administration of Public Works (PWA) for a grant of $10,000 to construct the first addition to our school. The following photograph was taken before the first addition was constructed.

The original building had no cafeteria so everyone brought their own lunch to school. However, many families struggled to provide their children with decent lunches because they couldn’t afford to buy food. This was long before the days of free and reduced-price meals, and it wasn’t until President Franklin D. Roosevelt was inaugurated in 1933 and his New Deal program went into effect that relief came to these families. Alvin Dennis, a student at Franconia Elementary during this time, recalled that local farmers and parents would donate vegetables and the mothers of students would volunteer to prepare a hot soup that was served at lunchtime.

World War II and the growth of the Federal Government had a profound effect on Fairfax County and its public school system. The period of population growth that followed the war is known as the baby boom. In September 1950, there were 16,163 children enrolled in Fairfax County Public Schools (FCPS). By September 1960 that number would climb to 59,870.

Some relief in class size finally came with the opening of Bush Hill, Cameron, and Garfield elementary schools in 1953 and 1954. Several additions to Franconia Elementary School were constructed during the baby boom era, in 1948, 1953, and 1956.

The next major change to come to Franconia Elementary School happened in the early 1960s. When Franconia opened, public schools in Virginia were segregated by race. African-American children living in our area originally attended Laurel Grove, a one-room schoolhouse that still stands today on Beulah Road. After Laurel Grove closed, the children were bussed to schools at Gum Springs on Route 1. All racially segregated public schools in Fairfax County were closed at the end of the 1965-66 school year, marking the beginnings of the ethnically and culturally diverse Franconia school community we know today.

Explore the evolution of our school in this series of aerial photographs courtesy of Fairfax County's GIS & Mapping Services. 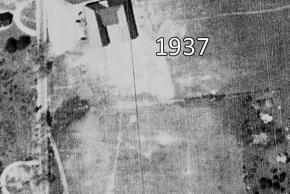 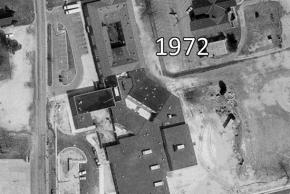 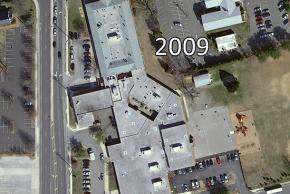 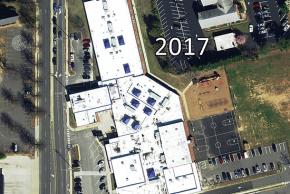